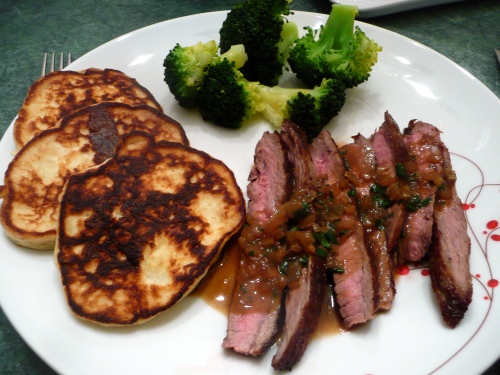 It’s Friday once again and you know what that means:  it’s time for French Fridays with Dorie!  This week’s recipe is a fluffy mashed potato pancake called Matafan.

Matafan are a flexible dish that can be served in many ways:  hors d’oeuvre, side dish, or snack.  I think they could also be good served with brunch or as part of a “breakfast for dinner” meal.  I served mine as a side dish with beef, with a swipe of butter on top.

Cakes on the Griddle...

When my husband saw what I was making he said it looked like I was making pancakes.  He was a little disappointed when I told him yes, a potato pancake that I’m serving as a side dish.  He was thinking maple syrup!  He perked up a bit when I told him Dorie’s husband eats his with syrup.  As we were eating dinner I noticed he had his pancakes in a stack on the side of his plate but was not eating them.  I asked about it and learned he was saving them until the rest of his food was gone so he could eat them with syrup!  I did make him eat one without syrup for comparison, but he said he preferred them with the syrup.

I really liked these!  I thought all they needed was a bit of butter.  My daughter really enjoyed them too.  It was a fun, different way to serve potatoes for dinner, but I can see them served with bacon and eggs too.

French Fridays with Dorie is an online cooking group, cooking our way through Dorie Greenspan’s book Around My French Table.