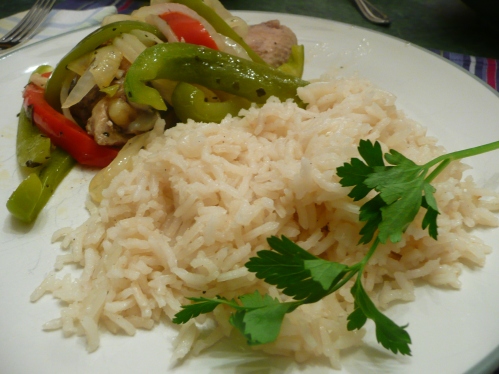 This is a story about luck, quick thinking, and coincidence.  Let me start from the beginning…

One of my favorite food bloggers, Pam over at Sidewalk Shoes, loves Mark Bittman.  I had never heard of Mark Bittman before reading her blog, but I was intrigued.  When Pam recently hosted a giveaway for Bittman’s iPhone /iPad apps called “How To Cook Everything” (based on his cookbook How To Cook Everything) I jumped on it.  Guess who won the iPad app?  Lucky me!

Fast forward to Thursday night.  While I was working on the evening’s main course, I decided we needed a rice dish on the side.  The dish suggested by my cookbook was a little too involved nor did I have all the ingredients.  I wanted something quick and simple to put together, but not plain white rice.  Really, I just wanted a basic rice pilaf.  I’m sure I could have come up with something on my own, but I didn’t want to.  I wanted to be spoon-fed.  I also didn’t have time to search through my cookbooks for a suitable recipe.  What’s a semi-lazy, pressed-for-time cook to do?

Aha!  My iPad app!  Surely something called “How to Cook Everything” would have a recipe for rice pilaf.  I launched the app, did a quick search, and a minute later had the perfect recipe. 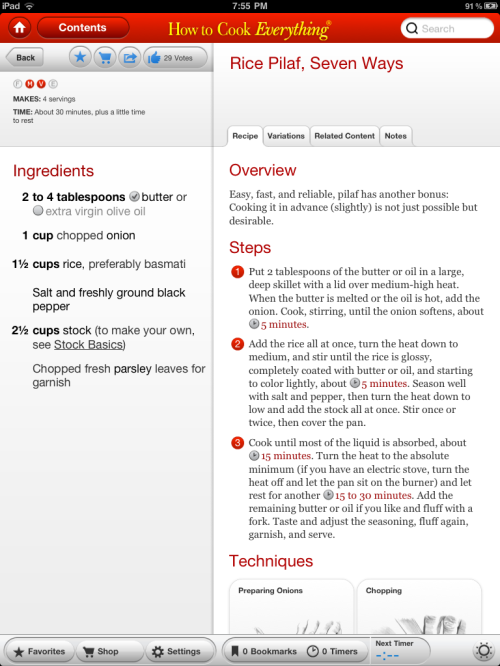 The recipe provides several variations.  I stuck with the main version, but I was very tempted by the “Vermicelli Pilaf” variation.  There are a couple of Mexican-themed versions that look interesting as well.

I had one beef with the recipe.  After the onions are sauteed and the rice is added, the recipe instructs you to turn the heat down to low and then add the broth.  I found that the broth was not hot enough to really cook the rice with this method.  I turned the heat up until the broth began to simmer, and then I turned it down to low.  Otherwise, great recipe and just what I was looking for!

Now for the coincidence part of this story…  This is my first Mark Bittman recipe, and the very day this story occurred, Pam was (still is) hosting a Mark Bittman blog hop over at her site!  So, I have decided to participate.  This post will be my first entry into the Tackling Bittman Recipe Hop.

Put the butter or oil in a deep skillet or pot (one with a tight-fitting lid) over medium-high heat.  When the butter is melted or the oil is hot, add the onion and cook, stirring, until the onion softens, about 5 minutes.

Add the rice all at once and turn the heat down to medium.  Stir until the rice is coated with the butter or oil and starting to brown lightly, about 5 minutes.  Season well with salt and pepper.  Add the stock and bring to a simmer, stirring once or twice.  Cover the pan and reduce the heat to low.

Cook until most of the liquid is absorbed, about 15 minutes.  Turn off the heat (but leave the pan on the burner) and let the rice rest for another 15 to 30 minutes.  Fluff with a fork before adjusting the seasonings to taste, garnishing, and serving.