This past Thursday was Thanksgiving in the United States.  I hope all of my American readers had a lovely holiday!  I have so much to be thankful for:  family, friends, health, a roof over our heads, my husband’s job that allows me to stay home, and the luxury to cook for fun rather than just to feed our bellies (among many other things to be thankful for!).

For my family, all holidays revolve around food.  But none is the food so steeped in tradition than Thanksgiving.  This year I had the honor of hosting my family for the first time ever!  In total, there were eleven of us sitting down to feast and give thanks, which is a lot for my small family.  The youngest was my almost 3 year old niece, and the oldest my 90 year old Grandma.  Four generations were represented!

I had a great time planning and preparing the meal.  I knew early on that I would be preparing a couple of items from Around My French Table for appetizers.  When the November French Fridays with Dorie recipes were announced, I was very pleased to see last Friday’s pick was “cook’s choice”.  I chose two recipes that were made by the group before I joined in: Gougeres and Sweet and Spicy Cocktail Nuts.

The Gougeres were a huge hit!  How can you go wrong with something that is basically a cream puff flavored with cheese?  These are the perfect make-ahead appetizer since they can be frozen after shaping and baked straight from the freezer (we won’t go into the fact that I didn’t quite manage to get them made ahead of time). 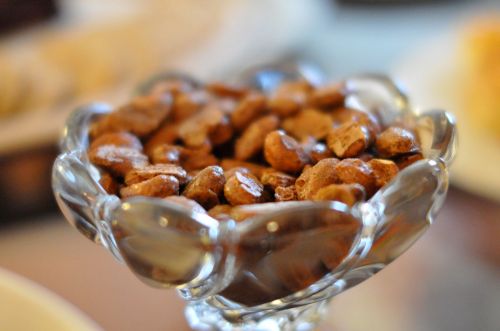 The Sweet and Spicy Cocktail Nuts were also well received.  A couple of us (including myself) wished the flavor of the chili powder had been a bit more pronounced, but others were glad they weren’t spicy.  I used a mix of almonds, cashews, and brazil nuts.  Pecans would also be a delicious choice.

My menu was a mix of family favorites and new dishes.  I was told in no uncertain terms that I must make the “Kerschbaum Family Stuffing” and a turkey, but was otherwise given free reign.  Here is the complete menu:

Finally, I have always wanted to try the “Poll” feature on WordPress and finally thought of an excuse to use it!  Tell me which Thanksgiving recipe you would like me to share:

An Apron for Buttercup

Well, the apron isn’t really for Buttercup, since Buttercup is a horse. My daughter takes therapeutic riding lessons at the Center for Adaptive Riding (CAR) and Buttercup is the horse she rides. CAR is in the midst of their largest fundraiser of the year, the Ride-A-Thon and Fall Family Fun Fest.  My daughter is raising money by riding in the Rida-A-Thon.  I made the apron to donate to the raffle or silent auction at the Fun Fest.

The Center for Adaptive Riding is a wonderful organization. They provide therapeutic riding lessons to children and adults with a variety of disabilities. It is run entirely by volunteers and they are so good with the riders. The tuition we pay for lessons only covers about half the cost of those lessons. Money raised by the Ride-A-Thon and Fall Family Fun Fest goes directly towards running CAR and caring for the horses, including Buttercup. CAR accepts donations through their website year round.

The best thing about CAR is that my daughter loves her lessons! The huge grin on her face when she is riding says it all.

For those of you who happen to live in Reno, come to the Fall Fest and Riding Demonstration!  Details can be found here:  Baked Potato Bar and Fall Family Fun Fest.

Now, how about that apron? The pattern is the Emmeline Apron from Sew Liberated. I chose “Western”-themed fabric since this is for a horseback riding event. The red side looks like a bandana and the other side has words like “Buffalo Bill” and “Wild West”. For a more technical review of this pattern see my review on PatternReview.com.

I love this apron – I think it is really cute! Would it be OK if I try to win it back at the Fall Fest so I can keep it?