I went rogue on this week’s Cook the Book Fridays recipe. First of all, I was having trouble picturing this layered and baked “soup” that the original recipe seems to be. Secondly, my husband loves butternut squash but doesn’t eat bread, so I couldn’t figure out how to make this into something he could enjoy too. I had my “a-ha moment” when I realized I could puree the onions, butternut squash, and broth into a delicious soup, and then top off my serving with bread and cheese.

So, the recipe as written, has one layer toasted sourdough bread with cooked onions, broth, thinly sliced butternut squash, herbs, and generous amounts of cheese. It’s baked in the oven until everything is cooked through and the top is nicely browned. 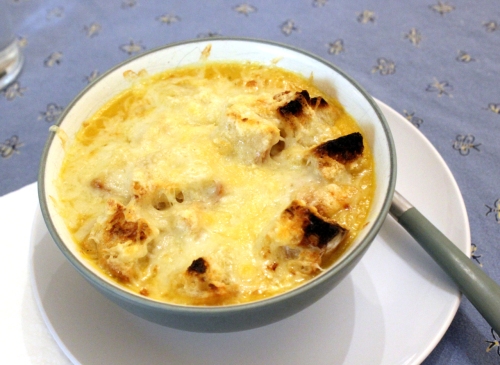 To make my version, I cooked the onions as instructed. When it came time to add the broth, I also added cubes of butternut squash. I simmered it all until the squash was very soft. Then I added the herbs and pureed the whole thing with an immersion blender. I topped my bowl of soup with cubes of toasted sourdough bread, then topped the bread with shredded Gruyere and Parmesan cheeses. I ran it under the broiler until the cheese was melted and beginning to brown.  For my husband’s soup, we just topped his soup with the cheeses.

It worked! I felt like my version of the soup was in the spirit of the original recipe, and my husband really enjoyed his. Win, win!

If you would like to try Butternut Squash Bread Soup, with or without my modifications, you can find the recipe on page 163 of David Lebovitz’s book, My Paris Kitchen.