It’s Friday! I will be sharing two Cook the Book Fridays recipes with you today. I had intended to make the dessert, called Merveilleux, for Valentine’s Day, but I was sick with a nasty cold that week and just didn’t feel up to making it. The Wheat Berry Salad is the “official” recipe of the week. 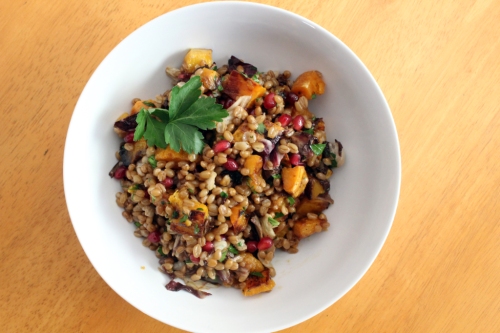 Wheat Berry Salad with Radicchio, Root Vegetables, and Pomegranate is just like it sounds. Cooked wheat berries are tossed with roasted root vegetables (I chose butternut squash because I found a bag of pre-cut squash that was just the right amount for the recipe), wilted radicchio, parsley, pomegranate seeds, and a citrusy vinaigrette. I made half the recipe and ate it for lunch over the course of two days.

So, Wheat Berry Salad with Radicchio, Root Vegetables, and Pomegranate was only OK for me, but it’s not the fault of the recipe. This type of salad just doesn’t do much for me and I would have never chosen to make this one if it weren’t for Cook the Book Fridays. That said, it did make for a satisfying lunch.

I mentioned above that I had planned to make Merveilleux for Valentine’s Day. Well, my husband’s birthday was the following week, so I made it for that special event instead.

This year’s birthday was a fun one because our daughter is finally starting to get excited about birthdays (hers and others). She had been looking forward to Daddy’s birthday, so I decided to capitalize on her interest and get her involved. I took her on a special outing to select Dad’s gift and card, then she helped me wrap the gift and signed the card. She was so excited to give him the gift on his birthday. And of course he loved receiving it from her.

Making Merveilleux was quite an involved process that took a good part of the day. I wasn’t really sure what I was even making. This recipe would have benefited from a photo of the finished product.

Basically, Merveilleux is two vanilla meringues filled with a coffee-flavored cream, then covered in that same cream, and coated with finely chopped chocolate. It was very messy to make and my finished products were not very pretty (I don’t think I got the cream stiff enough). The one pictured above was the prettiest and the rest were far less beautiful. The treat pictured below was a simplified Merveilleux that I made for my daughter.

These were delicious! The coffee cream was so good, and I ended up eating quite a bit of it straight out of the bowl. I only made 4 filled Merveilleux, but I enjoyed eating the rest of the meringues on their own. BUT, I’m not sure it was worth the mess and effort. Perhaps Merveilleux is one of those treats best purchased from a pastry shop in Paris.

You can find the recipes for Wheat Berry Salad with Radicchio, Root Vegetables, and Pomegranate and Merveilleux in David Lebovitz’s book, My Paris Kitchen.