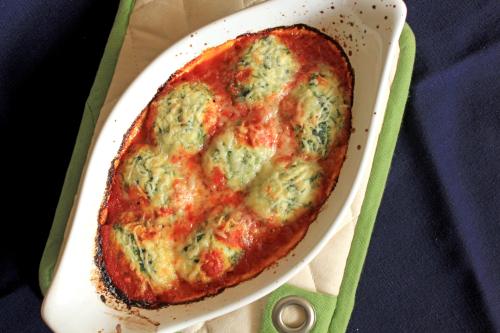 Happy French Friday!  This week’s recipe is one of those from the book that I never really noticed.  I just kind of glossed over it.  But then I read it, and it sounded good!  I think the problem is the name:  Storzapretis.  That doesn’t mean anything to me.  The subtitle has more meaning: Corsican Spinach and Mint Gnocchi.  That sounds more like something I can get into!

Storzapretis is a ricotta-based gnocchi from the island of Corsica.  It has a nice amount of spinach, as well as Gruyere and mint.  It is baked in a tomato sauce of your choosing (I used homemade roasted tomato sauce made from garden tomatoes that I had in the freezer).

It turns out this was a tricky one to make.  There was much discussion about how to best make this without having the gnocchi fall apart to bits while cooking.  My first attempt was very successful and I got a little cocky.  My second attempt was a disaster, and my third attempt was another success.  Here’s how it all went down:

1) The night I mixed up and formed the gnocchi, I cooked up half of them as directed after freezing them for half an hour to firm them up a bit.  I boiled them at a very low simmer and then they were baked with the tomato sauce with cheese sprinkled on top.  No gnocchi disintegrated, and they were delicious!  I took no pictures.

2) I had left the remaining gnocchi in the freezer over night.  The next day for lunch, the plan was to cook half the leftovers for the purposes of taking photos in natural light.  I plopped the frozen gnocchi into the lightly simmering water (Dorie said we could cook from frozen).  They disintegrated!  Only a couple of them stayed in any shape mildly resembling gnocchi, and they were very soft and misshapen.  Uh oh!

3)  Several Doristas had tried skipping the simmering step, and just baked the raw gnocchi in the tomato sauce.  I tried this with the rest of the leftovers – I had to get a photo!  Mine baked for quite a bit longer than directed since they were frozen, but it worked!  A delicious lunch and some beautiful photos.  Whew!

My conclusion after all this, is that the Storzapretis are delicious to eat, but persnickety to make.  I wouldn’t make this for company unless I was sure I had perfected my technique.

If you would like to see how others fared, check it out here.

Have a great weekend!