Garbure From the Supermarket 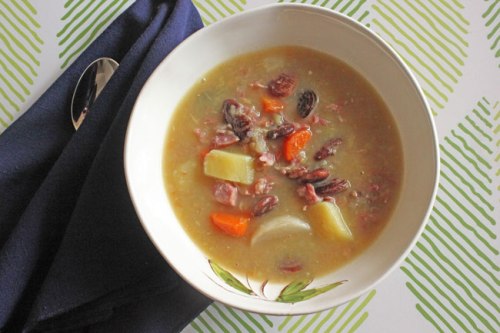 It’s Friday once again!  This week’s French Fridays with Dorie recipe is called Garbure From the Supermarket.

A garbure is a rustic soup, usually containing beans, cabbage, potatoes, and duck confit.  Since duck confit is not easy (or inexpensive) to find in the United States, Dorie came up with this version using ingredients more readily found here.

Dorie gave us several options:  1) pork shoulder or ham bone; 2) an optional duck leg; 3) an optional sausage; and 4) a variation using duck confit.  I went with 2 small ham shanks, no duck, and no sausage.  Also, I had some Christmas Lima Beans on hand, so I used them instead of the navy or cannellini beans.  Otherwise, I stuck with the recipe.

As I read through this recipe I had one big concern.  This soup simmers for 3 hours, and the vegetables (carrots, celery, turnips, potatoes, and cabbage) are cooked that entire time.  I was concerned the vegetables would turn into mush, and a fellow Dorista confirmed this fear.  So, I added the veggies at the half way point.  I still felt that they were overcooked, so next time I would only cook them for the last hour.

I really liked this hearty soup.  I was happy with my choice of using ham shank, but I would love to try it with pork shoulder and a sausage someday.  Having this soup simmer away all day made me wish for wintery weather (my apologies to those of you on the East coast…).  I could picture myself and family holed up in a cozy cabin in the snow with this soup to keep us warm.

11 responses to “Garbure From the Supermarket”