I’m back!  It’s been a busy few weeks, between traveling to Seattle for Thanksgiving, hosting a birthday party for my daughter (she’s 10!), and getting ready for Christmas.  Whew!  But I took time out this week for French Fridays with Dorie…

When I told my husband that this week’s FFWD recipe was Chopped Liver, he said, “There’s a reason for the saying, ‘What am I, chopped liver?'”.  Needless to say, I made this one for myself since I didn’t see anyone else sharing this with me.  Luckily, I had saved a few chicken livers from whole chickens, and I had just enough to make a quarter of the recipe. 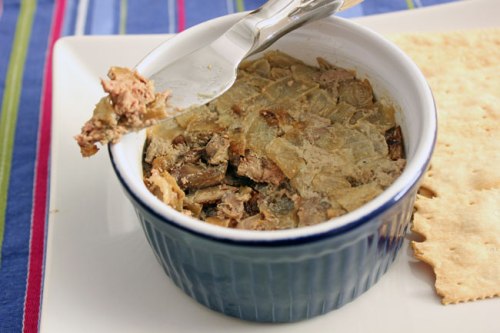 Mme. Maman’s Chopped Liver is a rustic take on pâté, meant to be eaten as an appetizer.  It is actually quite easy to make:  plenty of chopped onions are sauteed in oil, then the liver is browned well, chopped coarsely, and mixed in with the onions and plenty of salt and pepper.  Pack the mixture into a small dish (I used a ramekin) and chill for several hours. 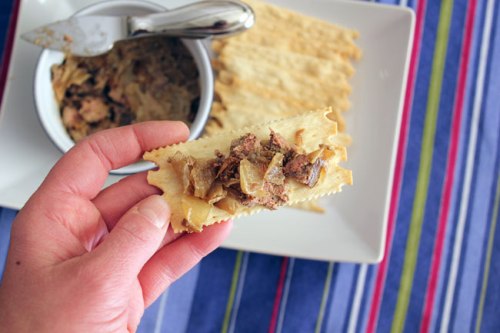 So, I decided to go into this with an open mind.  “Think pâté”, was my mantra.  I ate my Chopped Liver spread on crackers for lunch.  I liked it!  I won’t be craving this or anything, but it was pretty tasty.  Dorie’s husband uses this mixture as a sandwich filling, and I can imagine that it would be quite good! 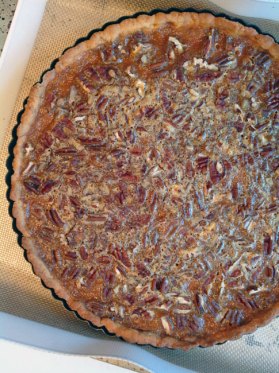 Here’s a little catch-up:  I made the Caramel -Almond Custard Tart from October for Thanksgiving.  Except I substituted chopped pecans for the almonds, as a nod to the more traditional pecan pie.    It was delicious!  My sister made a lovely triple-layer pumpkin pie that was also delicious, and the two desserts complimented each other very well. 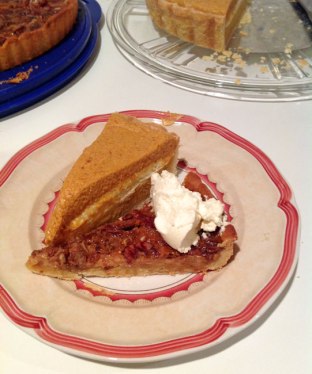 I will be back next week (famous last words…) as I am looking forward to next week’s recipe.  I also have a few other things I want to share with you, so hopefully you will see those soon, too!