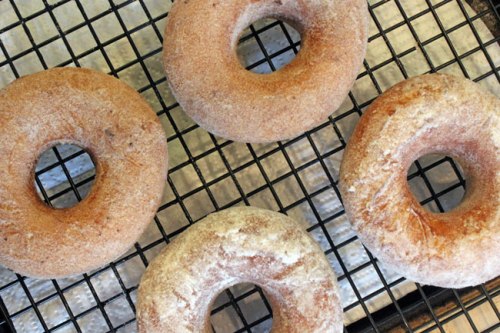 Doughnut seem kind of intimidating to make.  Not only do you have to work with a yeasted dough, but you have to deep fry it.  The deep frying is what seems intimidating to me as I don’t do it very often.  The intimidation factor is what led my sister and I to agree to make the doughnuts together when I visited family in Seattle earlier this month.

The dough itself was very easy to work with.  It is a brioche dough with a little less butter than normal.  Our dough took longer to rise than expected, but my sister and I suspect the yeast rather than the recipe.  But it was very easy to roll out and cut into the doughnut shapes.

I am happy to report the deep frying part went very well!  We only fried two at a time because it seemed less hectic than trying to do four at a time.  The key is keeping the temperature of the oil consistently at 350°F.  The instructions in the book were very clear and helpful.

The recipe includes instructions for coating the doughnuts in vanilla sugar.  We did the vanilla sugar, but also tried cinnamon sugar and powdered sugar.  I can’t decide which flavor was my favorite!  They were all good.

These doughnuts were excellent!  They were fresh and soft, but the bite had a bit of substance to it.  They did not seem overly greasy or oily.  The sugar coatings were delicious.  I would like to try a glaze sometime.

None, because I made these at sea level.

I had a recipe all picked out for July, but then French Fridays with Dorie selected a dessert for July that was kind-of sort-of similar.  We don’t need two big desserts in one month, so I will save the tart I had selected for August.

For July, I will make Traditional Madeleines (page 94).  I will share my results with you on (or about) July 30th.