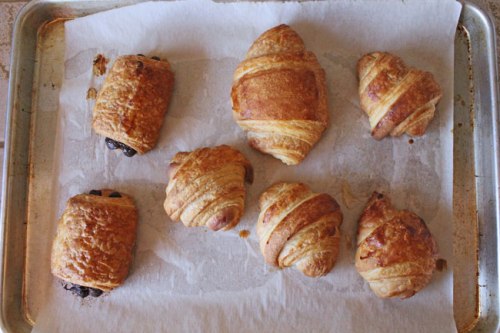 Croissants!  They seem like the kind of thing that can only be made with good results in a bakery.  But, if you have some time and follow the instructions in Bouchon Bakery, you can make them at home.

Making croissants is quite a process.  First you make a poolish, with flour, water, and a pinch of yeast.  This sits overnight until the yeast has exhausted it’s food supply.

Next, the fun part begins!  First, you get to pound a block of butter with a rolling pin until it is flattened into a rectangle.  Then you mix the dough and let it knead in the mixer for 20 minutes.  The dough then rests for an hour (the dough rests a lot in this process!).

Then the rolling and folding process begins, to encase the butter in the dough in lots of layers.  Let’s just say there is a lot of rolling, folding, resting in the freezer, and more rolling.  There is a nice description of the process (with pictures) on King Arthur Flour’s blog:  Making Croissants.

Finally, after several hours, the dough can be shaped into croissants.  The book gives instructions for both traditional croissants and pains au chocolat (aka chocolate croissants).  I made both!

After shaping, you’re still not done!  The croissants have to proof (rise) for a couple of hours before they are ready to go into the oven.  I got so anxious to get these in the oven I forgot to do the final egg wash, so they are not as shiny and browned as they should be.

My house smelled like a bakery while these were baking.  It smelled so good!  I could hardly wait to try my first one.  It was worth all the effort!  I was very impressed by how well these turned out.  The outside was crisp and flaky, and the inside soft and moist and buttery.  They tasted like croissants should taste.  And the pains au chocolat  were amazing!!

We had chicken salad sandwiches on our croissants!

None, but I did have to use all of the extra water the authors have you reserve in case the dough seems dry.

April is going to be a busy month, so I have chosen a recipe that can be made in less than a day:  Caramel Popcorn (page 338).  I will share my results with you on April 30th!