I am really enjoying my bread challenge.  Each loaf of bread I make is better than the one before and I am learning a lot! 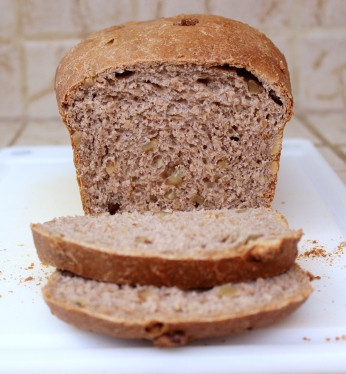 I focused on two things while making this bread:  kneading it enough and letting it rise enough once it got in the pan.

One of the most difficult things for me in learning how to bake bread has been knowing when I have kneaded the dough enough.  Recipes say things like “knead until smooth and elastic”, but what does that really mean?  My sister told me about the “window test”, in which you stretch a little piece of the dough between your fingers and if it makes a thin sheet without breaking then you can stop kneading.  I tried this and it seems to have helped.  I found this link which talks about kneading and shows a nice picture of the window test.

I really think I got the dough kneaded enough this time (or at least very close!).  Not only could I stretch the dough thin fairly well (a little tricky with the walnuts), but I could see the strands of gluten starting to form.

Another problem I have had making bread is I don’t feel the bread is quite tall enough.  I suspect I haven’t been letting it rise quite high enough for the final rise.  I have also been getting “lumpy” tops, rather than smooth. 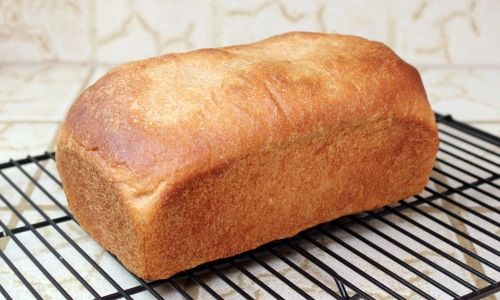 This is the first loaf I baked. You can see that the top is a little lumpy.

The other change I made was to let it rise a little higher in the pan.  The recipe said to let it rise so it crowned an inch and a half above the pan.  I actually took out a ruler and waited until it got high enough. 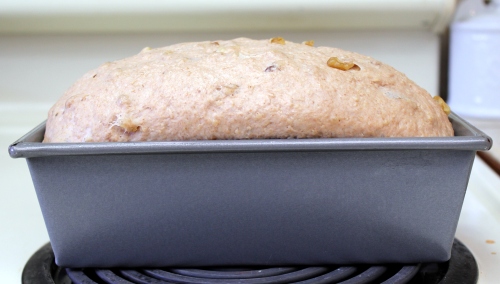 Nicely risen and ready to bake!

I also made my now-usual altitude adjustments:  I added an extra tablespoon of water, and let the dough rise a second time before shaping it for the final rise.  I remembered to use my bread improver this time too!

This is definitely my best loaf so far!  I know I say that each time, but really it just means I’m learning and improving.  The flavor is wonderful!  And it has a nice soft texture that is perfect for sandwiches and toasting.  I finally got a nice smooth top, rather than a lumpy one.

I am looking forward to continuing my bread challenge and continued bread improvement!  If you are interested in making Maple-Walnut Oat Bread for yourself, you can find the recipe here on King Arthur Flour’s site. 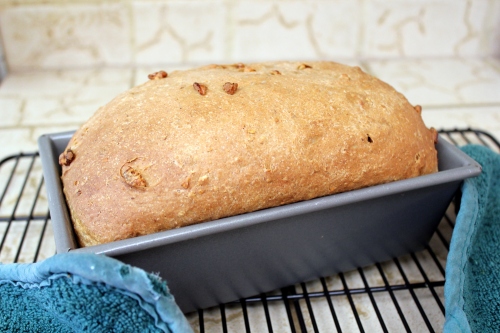