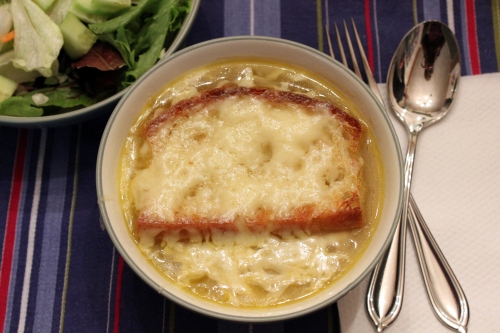 We are a house divided when it comes to soup. One of us (me) likes their soup served piping hot, and the other likes his merely warm.  (My daughter is not part of this equation since I always make sure to serve her soup cool enough not to burn her tongue).  I often get accused of serving boiling hot food for dinner, however my husband usually manages to get around the problem by eating his salad first while his soup cools.

So I knew there would be trouble when Dorie recommends that this soup be served “brûlante”, or “burning hot”.  Indeed, the main feedback I got about this recipe is that it was too hot.

“Cheese-Topped Onion Soup” is the quintessential French Onion Soup.  A large amount of onions are slowly caramelized, then the addition of white wine and chicken broth turns it into soup.  The crowning touch is a piece of toasted bread and melted Gruyère cheese sitting atop the soup.

I had a problem getting my onions to turn a “deep caramel color”.  After 3 hours(!) of cooking and giving into the temptation to try to speed things up by turning the heat up, they were only a light tan color.  My husband and I ended up eating dinner after my daughter went to bed because it was running so late.  I’m curious to see if others had the same problem. 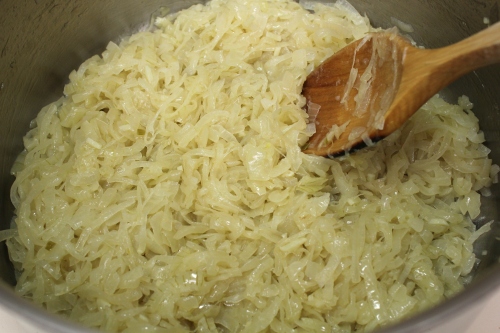 I found this soup to be very satisfying to eat, but not to make.  I enjoyed the flavors and especially the cheesy bread on top, but it wasn’t quite worth the nearly 4 hours it took to make. 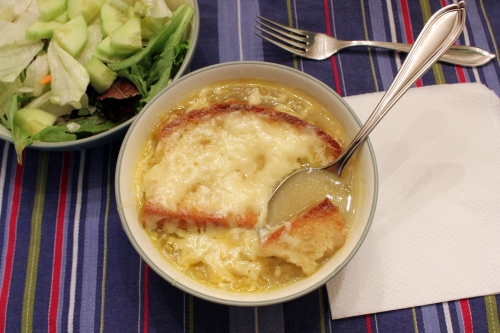 “Cheese-Topped Onion Soup” is this week’s French Fridays with Dorie recipe.  You can find the recipe in Dorie Greenspan’s book
Around My French Table.